Once again it has been a weekend of varied culinary delights.  Starting on Friday, with a kind of mish-mash of different cuisines, The problem TV and also needing to use up vegetables I had kicking around in the fridge.

I’ve been watching ‘Food Network’ a lot recently and more specifically a programme by the name of ‘The Pioneer Woman’. Which is presented gushingly nice American lady called Ree Drummond. There are some very nice things to be learned on that show, even if one of the highlights on one of the recipes recently was cheddar that she had grated herself,  (buy a grater?) but otherwise I love the show. I’m a massive fan of American food (mainly the portion sizes) and I love how they speak when conveying recipes for example; ‘I’m going to go ahead and stir in the cheese now’. We never sound like that on this side of the pond! ‘The Pioneer Woman’ is the reason why my Friday night cuisine consisted of Buffalo style Hot Wings (she was making some game day recipes!)

Thursday evening’s episode of the show featured a lovely little recipe for Hot Wings and I haven’t had them for ages and you know when you just get a craving for something? Well that happened and it was hot wings on the menu!  I did them a little differently to how I normally do them because I started them off in the deep fryer before transferring them to the oven to finish off and incidentally set my fire alarm off. However all was well once I done the burnt food Morris Dance underneath the alarm. For the wings you’ll need:

Basically, chuck the wings into your deep fryer for about 5 minutes and then transfer to a pre heated oven about 220c, for around 10 minutes.  Once the wings are cooked and all lovely and crispy, put them in a bowl and smother the wings in the sauce.  Then, grab yourself a napkin and a sneaky bottle of beer and you’re all set! 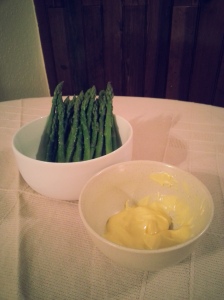 With the wings I had Asparagus with Hollandaise. I know! I know! It’s really weird! This is why I would never win Masterchef, as my plate would have stuff on it that I like to eat but just not necessarily together.  To be honest though, the asparagus needed using up and I’d bought a jar of Hollandaise sauce (yes I know, lazy…) and needed to try it, you know what? It was really nice!

Finally since the deep fryer has been out this weekend I’ve been experimenting with different versions of the classic chips and my favourites so far have to be either the carrot fries I made or the beetroot wedges, but they make the oil look like a scene from a murder mystery having said that they were fantastic! Happy cooking!