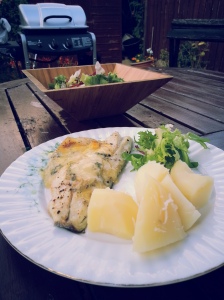 You know how sometimes you just throw things together at the last minute, well this dish was one of those.  I’d got myself some Bass (I’m slightly addicted to the stuff at the moment) and wasn’t really sure what to do with it.  I’ve kind of exhausted putting it with Samphire and  a Potted Shrimp butter, so something new was in order.

Now I’d seen that Cod goes fairly well with Cheddar and some Vine Tomatoes. When roasted it makes for a simple and tasty dinner!  But I wasn’t feeling putting Cheddar on my bass, I wanted something both quick but with a little more flavour.

After much fridge-staring and ‘umming and aahhing’ I settled upon Stilton, now to some of you this may be like “really? You didn’t know…” and honestly I didn’t at the time I was a little dubious as to whether the strength of the Stilton would over power the delicate flavour of the fish. It turns out that it doesn’t and it actually compliments everything rather nicely with the natural saltyness of the cheese seasoning the fish wonderfully!

All you need to do is to cook the bass under the grill on both sides and just before you’re ready to plate up, stick a decent slice of stilton on to the fillet and then put it back under the grill under the cheese has just started to melt.